“That’s What I Love About ICQ” — Ryan Hart

“That’s What I Love About ICQ” — Ryan Hart

Ryan Hart began working as a consultant for ICQ three and a half years ago, and though his path to a rewarding career at the company was unconventional, he feels fortunate to have found a job that he loves.

How Ryan Found a Rewarding Career at ICQ 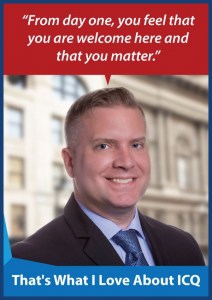 Ryan’s route to ICQ began after he left his previous position due to organizational changes. As he looked to the next step in his career, he had no idea how long his job search would last or where he would land. After being on the job market for only a month, he accepted the position at ICQ.

Eager to get to work for ICQ’s biopharma clients, Ryan’s first placement at a client site was originally a three-month project to validate equipment, utilities, and computer systems used in the manufacturing process.

Fast forward a few years, and Ryan is still working at that same client site after forging an excellent working relationship with the Director of Engineering and getting several contract extensions.

When Ryan started at ICQ, Mike Bogan, the company president, took him under his wing immediately. Mike would email him often to make sure he was feeling comfortable and getting organized at the client site.

Ryan adjusted to ICQ life quickly thanks to senior management, taking a vested interest in his career and giving him the tools he needed to succeed.

“I immediately began volunteering for assignments that would help me learn more about the company,” said Ryan. “When I became ICQ’s primary recruiting contact, I performed interviews and phone screens, which helped me connect with many members of our team and new hires. After a year-and-a-half of recruiting, I felt compelled to take even more responsibility at the company.”

Ryan wanted to pursue a managerial position, and thanks to ICQ’s open-door policy, he was given a clear path and opportunity to achieve his new career goal. Ryan followed the track and earned a promotion to Managing Consultant after less than two years.

“What I love most about working at ICQ is the feeling of family,” said Ryan. “The company genuinely cares about its employees’ success and supports our career growth with personalized mentorship. The little things don’t go unnoticed — the senior leadership team regularly stops to ask how employees are doing, and they are always accommodating to our location and commuting needs when on assignment.

“From day one, you feel that you are welcome here and that you matter.”

We have several exciting career opportunities for you. Take the skills assessment today!

ICQ offers the best benefits package in our space, including:

Michael Gatta has 15+ years of commissioning, qualification, validation (CQV) and quality experience and a total of over 20 years of experience in the pharmaceutical / biotechnology industry.

Get It Right the First Time