“That’s What I Love About ICQ” – Jack Rivet

The day after graduating college in May 2021, Jack Rivet started his job at ICQ. After working as an engineer at Moderna for more than a year, he’s gained more responsibilities and valuable experiences within the commissioning, qualification, and validation field.

He received his B.S. in Mechanical Engineering and Technologies from the University of Maine. While there, he poured concrete for a construction company during his junior and senior years and interned at Pfizer during the summer after his sophomore year. While at Pfizer, he met and worked with some ICQ employees.

As his graduation approached, he knew he was interested in the biotech field and remembered ICQ. He wanted to be a contractor and not a full-time employee early in his career as he wanted to gain experience with various companies and methods of CQV to gain a diverse background.

“I was interested in the possibility of working with startups and within buildings under construction because of my experience in the construction field,” said Jack. 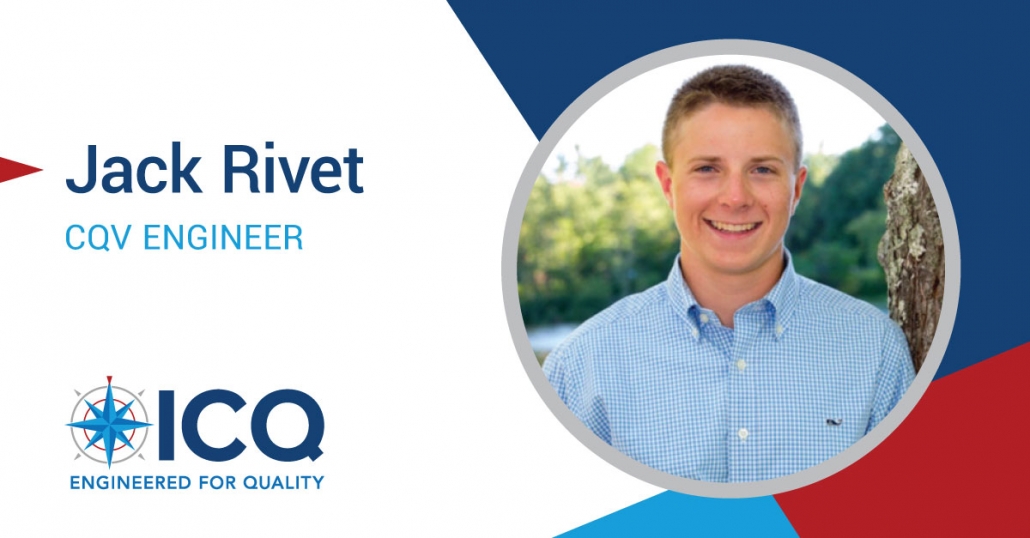 “I love working at ICQ because of the employees. They’re great people. I also enjoy the variety of work I get to do on a daily basis. It’s something different every day. It’s great for my career development”

He sparked up a conversation with ICQ’s president, Mike Bogan, and sent him his resume.

As Jack described the hiring process, he said, “Mike was great; he called me multiple times during the hiring process just to chat about random things and see how I was doing with college wrapping up. I saw that ICQ could give me what I was looking for: contract work, exposure to many companies and validation methods, and the possibility of traveling for work.”

The day after graduating from the University of Maine, he started as an engineer at ICQ!

Another aspect of his job is the installation and operational qualifications for analytical balances, Ph/conductivity meters, biological safety cabinets, and controlled temperature units.

When asked why he loves working at ICQ, Jack responded, “I love working at ICQ because of the employees. They’re great people. I also enjoy the variety of work I get to do on a daily basis. It’s something different every day. It’s great for my career development.”

He added, “ICQ is great because if you want to take something on like new equipment or new documents, or if you need help, there is always someone in the company who can help you or point you in the right direction.”

Jack also mentioned enjoying the opportunity to attend a golf tournament hosted by ICQ; what made it even better was that his foursome won!

In addition to in-depth training and awesome clients, ICQ offers a robust benefits package that includes:

Search through our current coast-to-coast job openings, find something that interests you, and submit your information. We’d love to hear from you!

Join over 4,000 pharmaceutical industry professionals who get our best tips and resources.

This site uses cookies. By continuing to browse the site, you are agreeing to our use of cookies.

We may request cookies to be set on your device. We use cookies to let us know when you visit our websites, how you interact with us, to enrich your user experience, and to customize your relationship with our website.

Click on the different category headings to find out more. You can also change some of your preferences. Note that blocking some types of cookies may impact your experience on our websites and the services we are able to offer.

These cookies are strictly necessary to provide you with services available through our website and to use some of its features.

Because these cookies are strictly necessary to deliver the website, refusing them will have impact how our site functions. You always can block or delete cookies by changing your browser settings and force blocking all cookies on this website. But this will always prompt you to accept/refuse cookies when revisiting our site.

We fully respect if you want to refuse cookies but to avoid asking you again and again kindly allow us to store a cookie for that. You are free to opt out any time or opt in for other cookies to get a better experience. If you refuse cookies we will remove all set cookies in our domain.

We provide you with a list of stored cookies on your computer in our domain so you can check what we stored. Due to security reasons we are not able to show or modify cookies from other domains. You can check these in your browser security settings.

These cookies collect information that is used either in aggregate form to help us understand how our website is being used or how effective our marketing campaigns are, or to help us customize our website and application for you in order to enhance your experience.

If you do not want that we track your visit to our site you can disable tracking in your browser here:

We also use different external services like Google Webfonts, Google Maps, and external Video providers. Since these providers may collect personal data like your IP address we allow you to block them here. Please be aware that this might heavily reduce the functionality and appearance of our site. Changes will take effect once you reload the page.

The following cookies are also needed - You can choose if you want to allow them: